Why our epics are current 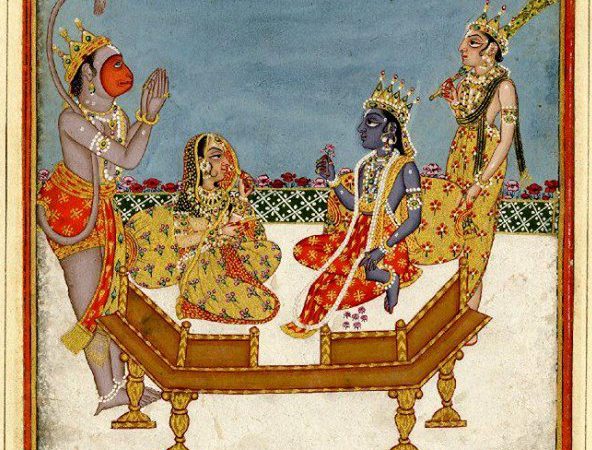 Our epics and the way we know them Our epics, the Ramayana and the Mahabharata are fascinating, and appeal at multiple levels: from just plain entertainment, to lessons in morality to path to discover the Almighty.  Irrespective of the various content-elements that make the epics appeal to a large swathe of people across centuries, they

Our epics and the way we know them

Our epics, the Ramayana and the Mahabharata are fascinating, and appeal at multiple levels: from just plain entertainment, to lessons in morality to path to discover the Almighty.  Irrespective of the various content-elements that make the epics appeal to a large swathe of people across centuries, they remain current and relevant even today, unlike those of several other cultures that remain largely of academic and intellectual interest.  The reason is that our epics are constantly evolving, dynamic, and yet, retain the core fibre of the primary epic.

Therefore, while for instance the Ramayana of Valmiki is different from Kamban’s Iramavataram or the many later regional retellings, the core story and its lessons are identifiable with none other than the Ramayana.  Indeed, the stories and sub-plots keep changing over time.  And significantly so.

Let us consider the story of Shabari, for instance.  We have all grown hearing childhood stories of Shabari’s devout offering of ber fruit to Rama, after first tasting them.  Interestingly, while Valmiki talks at length of Rama and Lakshmana’s encounter with Shabari, there is no mention of an offering of the jhootha ber fruit, the core of the popular Shabari story, signifying her devotion.  On the contrary, Shabari washes Rama’s feet and gives counsel to the brothers!

Let us take one last instance from the Ramayana – that of Ahalya.  The popular story of Ahalya narrates that Indra, who takes the form of her husband Gautama and “violates” Ahalya and when Gautama learns of this, he curses Ahalya to turn into stone.  Interestingly, in the Baala Kaanda of Valmiki’s Ramayana, Ahalya sees through Indra’s disguise, but agrees to be seduced out of “curiosity” and awe at the lord of the devas.  In a sense, Valmiki gives his Ahalya greater freedom and of exercising her choice.  Further, Valmiki’s Gautama curses Ahalya to turn invisible, and roam around, unseen, unconsidered, as punishment for her deeds.  Later retellings turn her into stone, delivered by Rama by the touch of his foot.  Thus, there is a transition from a narration with moral shades into one with an intensely devotional colour.  Interestingly, the Uttara Kaanda, now believed to have been composed by later poets, alludes to Indra’s deceit rather than Ahalya exercising a choice.  Retellings as late as Kamban and later ones, allude to Ahalya seeing through Indra’s disguise; the curse too is different in different retellings.  Therefore, it appears that very early on, various versions of the story appeared and took their own tracks.  A broad trend is that the various Puranas stick to the deceit track whereas the popular retellings/translations take the freedom of choice track. 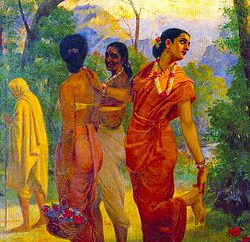 Let us now shift track to the Mahabharata.  The story of Shakuntala first appears extensively in the Mahabharata.  In Vyasa’s telling of the story, there is no amnesia brought on by the loss of the ring as a result of a curse by Durvasa.  Rather, when Dushyanta fails to come back for her as promised even after the birth of their son, she goes to confront the errant king in his court.  Dushyanta abuses her in very harsh words and disowns her.  Vyasa’s Shakuntala is not the demure, docile beauty of later imaginings.  At this rejection and public humiliation, she flares up and gives a strongly worded reply reminding him of his duties as a king, as a father and the importance of upholding one’s promise.  The heavens declare Shakuntala to be pure and Dushyanta now accepts her, with (according to me) a flimsy excuse that had he accepted her right away, she (and he) would have been subject to ridicule and doubt, but now that the heavens have declared her as chaste, his subjects would not cast doubt.   This story interestingly is similar in tone and plot to the abandonment of Sita by Rama.  The popular story of Durvasa’s curse and subsequent amnesia of Dushyanta is Kalidasa’s imagination, turning the story into a deeply romantic one in Abhijnaana Shaakuntalam.  That version became so popular that it has established itself as THE Shakuntala story!

Let us now look at the legend of Krishna and Radha.  Radha is so closely associated with Krishna, that there are temples dedicated to the couple, with vast amounts of literature describing their raasa-leela, Radha’s devotion to Krishna and Krishna’s affection for Radha.  So much so, that to imagine Krishna without Radha is impossible.    Now, the first documentator of the Krishna story – Vyasa, makes no mention of Radha.  Not in the Mahabharata, not in the Bhagavatam, not in the Harivamsam.  Radha first makes an appearance in Jayadeva’s Geeta Govinda, a deeply devotional work where Radha has as much prominence, if not more, as Krishna.

The instances are way too many to list in one article.  What is important is that each poet, each author and each translator, has modified the story a little, and made it into his own, yet retaining the flavour of the original.  This continues into current times as well, with mytho-fiction taking the story of the epics and retelling-reimagining them as new.  Yet, the story itself continues to last, absorbing the various versions into itself and growing into a large body of the epic, rather than letting itself wither and die.  The absorbing nature of our epics, and indeed our culture, is what keeps them alive, relevant and hugely popular.