In Adoration of The Cosmic Parents 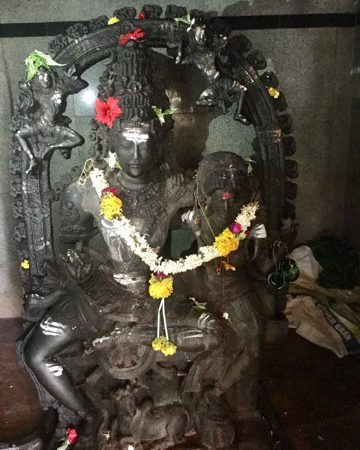 Kalleswara ShadlingaDevlaya in Aralaguppe  is a complex of six shrines to Siva , built between 9 th and 10th century by the Nolambas , feudatories of the Western Gangas , who governed regions spread around  Karnataka – Andhra hinterlands of today . At  first glance , the shrines do not look very impressive . Just

Kalleswara ShadlingaDevlaya in Aralaguppe  is a complex of six shrines to Siva , built between 9 th and 10th century by the Nolambas , feudatories of the Western Gangas , who governed regions spread around  Karnataka – Andhra hinterlands of today .

At  first glance , the shrines do not look very impressive . Just modest sized cubicles with low , tiered vimanas , bright with white wash , with almost no sculpted features anywhere on the outer walls because they  have all been  rebuilt with brick and mortar .

Kalleshwara’s shrine , the oldest and the most well known of the six is approached by a lateral entrance through a modern grill gate . Except for a  strip of moulding running at adishtana level  , with well spaced out kudus and a sole pierced window , sadly damaged , on the wall , the shrine betrays no inkling of the treasures that await one inside. 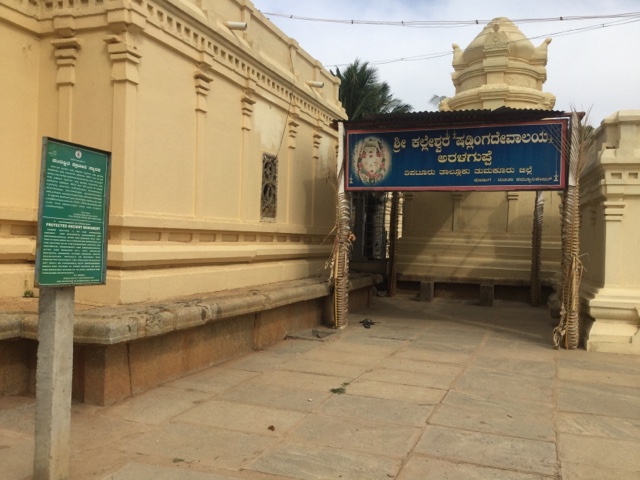 The moment one steps onto the porch , its a different world altogether . The venerable age and masterly creativity of Nolamba vintage shows in the doorway with intricately carved jambs and in the low ceilinged mukhamantapa with their signature  cylindrical pillars topped with  pillow capitals.

The piece de resistance , however is that acme of artistic excellence , the ashtadikpala ceiling in the navaranga , which has been hailed as  one of the best pieces of indian religious art of all times .

To the left of Nandi in the porch , is a small cell housing another magnificent piece of Nolamba art : The UmaMaheshwara . In  design and craft , it is a stunner . The cell being small , the 1.5 m high stele , filling up the space , fairly overwhelms one .

The stele shows Shiva and Uma as a couple seated together on a pitam , under a prabhavali , attended by Nandi below and two gandharvas above .

Termed UmaMaheshwara , Umasahita or Sa’mbika , this is one of the 64 forms of Shiva Murthis where the Formless takes a Form to exemplify a concept . UmaMaheshwara murthi denotes The Cosmic Parents ( ” jagatah pitarau ” ). 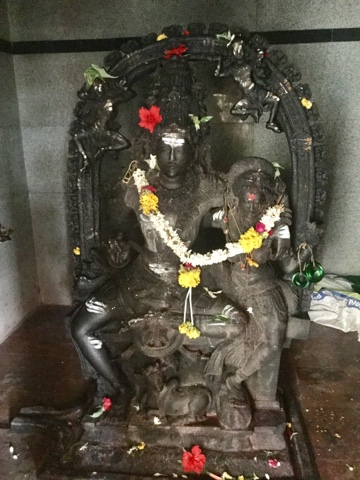 Seated on bhadrapita , in sukhasana , right leg dangling down , the left folded in double and laid across, Maheshwara Siva is an excellently  proportioned young man with a lithe , toned body and a pleasant demeanour exuding serenity . Though unfortunately , his nose is slightly damaged , he is still very handsome , with arched brows , fine , smiling lips and a firm chin. 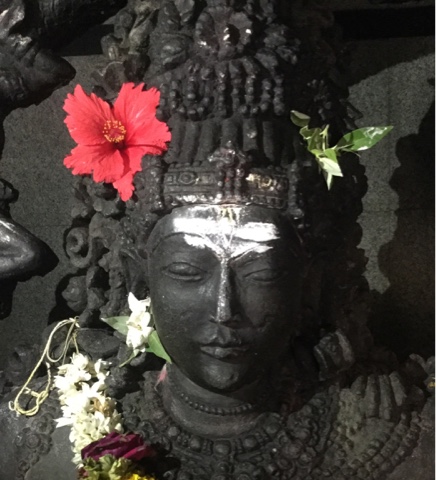 His left hand embraces the beautiful , young Uma , holding her close to him by her shoulder , as she sits with her left leg dangling down and the right leg folded up , pressing to his side , foot resting on the pitam . Her right hand is draped across his back , reciprocating his gesture of affection . She is a young girl, face  slightly averted , with a bashful smile playing upon her lips . Her nose has also suffered some damage , but it does  not mar her charm. 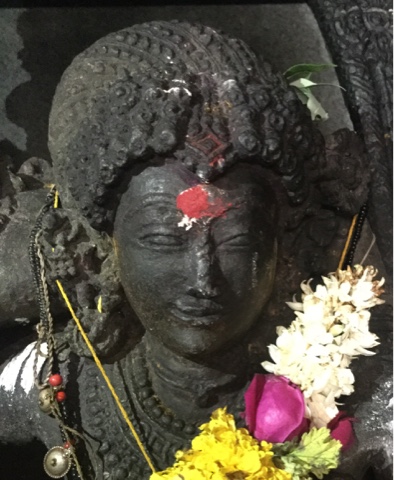 Shiva wears his jata in a stunning , high hairdo, interwoven  with ornaments and blossoms . A halfmoon is thoughtfully tucked in near the top knot  and the locks  on either side flow down in cascades.

In a designer style typical of him , he wears mismatched earrings : Makarakundala in his right ear and Patrakundala( rolled palmleaf )  in his left ear.

Since he is seated with his beautiful young wife , it wouldnt do to appear ungroomed . So, forget the ashes and tigerskins and snakes and other ascetic stuff. He preens here in handsome jewelry, masses of finely tooled necklaces , chains and magnificent arm bands . Three ropes of pearls hang across the chest as yagnopavitam  , and pass over his right hand   . 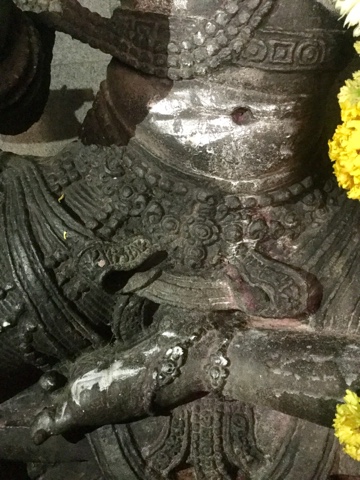 His soft silken garment is  tied with a sash that is worked into an exquisite bow and a flowing pleat at the side .

His anklet is sturdy and masculine with a single beaded band .

Whatever he held  in  his right hand has now vanished , leaving behind just a row of beads on the palm.

The skill of the ancient sculptor is such that one can readily see Maheshwara and Uma as youthful and very much in love . Just as Adi Shankara visualised in The UmaMaheshwara Stotram :

( ” Salutations to Shiva and Shivaa , who are perennially in the first flush of youth , clinging to each other in tight embrace …” ) 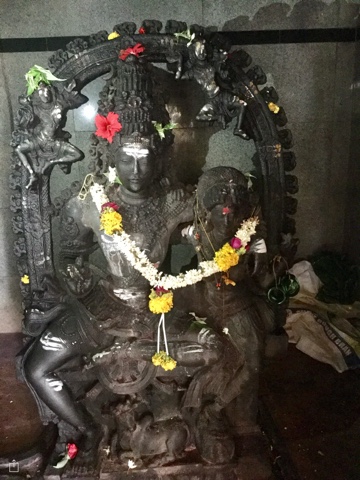 Uma is one of the DwadashaGauris , young , two armed and two eyed . Gowri is the iconic form of Prakriti who , according to Devata Murthy Prakarana , can be represented in twelve forms .

She is leaf-green in colour , representing  the sap of life , and wears red garments . She prefers to hold any of these attributes that denote Essence of Life and Consciousness : Kamala or Utpala ( pink or blue lotus ),Darpana ( mirror) , Kamandalu ( water pot) and Japamala ( rosary beads ).

To affirm that they are  inseparable, as UmaMaheshwara , she  shares the same peetam and prabhavali with Shiva  .

The Aralaguppe stele is arranged exactly  in this manner . But it is not  clear what she held in her hand originally, because the object is missing now . 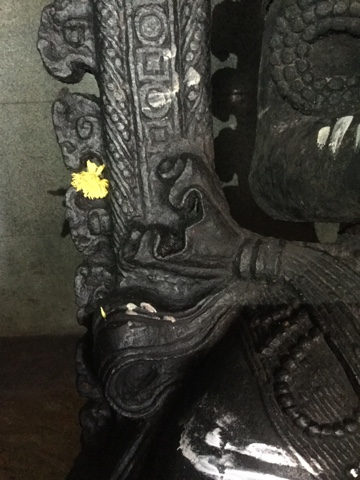 As the Eternal Bride , The Auspicious Wife ( Su Mangala ) this Uma is bejewelled head to foot and wears an elaboratly coiffure , interwoven with pearls . The artisan has carefully dressed her forelocks into stylish curls and added decorative pieces of jewelry at the parting of hair and on either sides. As a finishing touch ,a large flower has been tucked just above her left ear , in a style still very much in vogue among women in small towns .

The earlobes are fairly weighed down with ornaments all along the rim.

As laid down in Rupamardana and Vishnudharmottara ,her figure is just as high as Shiva’s shoulder , exactly . 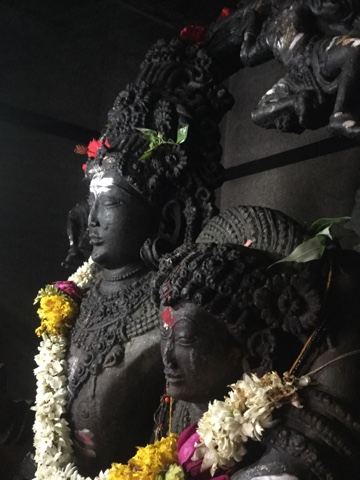 Fingers of her  left hand look like they are in the simhakarna mudra as required by the canons of iconography . On closer inspection however it is apparent that she was holding some object that is now lost . The  handle / stem part of the  object can be seen etched on her palm . It is endearing to see that local women worshippers have given her the auspicious green glass bangles to wear , which , being impossible to be slipped on to her wrist , hang in a bunch from her hand . Uma does  not refuse gifts from loved ones , however humble they may be  compared to the magnificent bracelet she wears .

Her perfectly manicured nails are complemented by simple band-like finger-rings.

In addition to the blackbead mangalasutram given by devotees , she has her chest covered with row upon row of carved necklaces and beads . 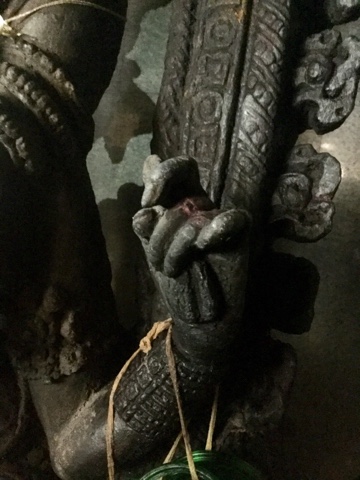 The bejewelled belt and gracefully falling hip chains ( mekhala)hold in place a fine wrap , pleated in the middle to fall , in fine drape , down to her ankles . At the back , the wrap is pulled up and tucked into her belt , with the end showing as a little fan like pleat .

On her ankle is a two tiered nupura , probably  with free hanging bells that tinkled as she walked . Above that is the close fitting , finely worked silambu / thande . She wears rings on all her toes . 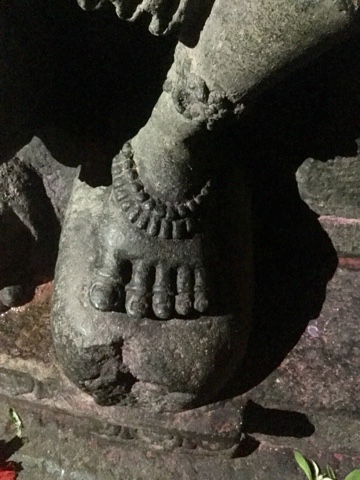 In front of the peetam , just by Shiva’s foot , sits a small Nandi  with a strange expression . He is alert and seems to be eavesdropping on their conversation ! 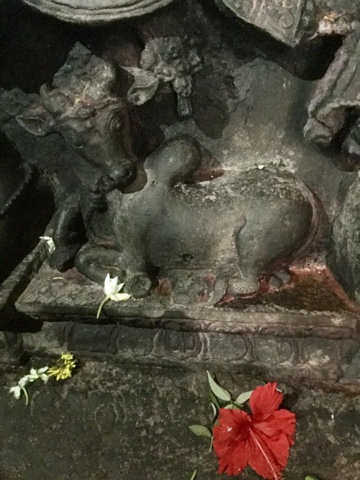 The shared  prabhavali is ornate with an inspired addition of two wonderfully crafted gandharvas , dancing in joy , on either side . 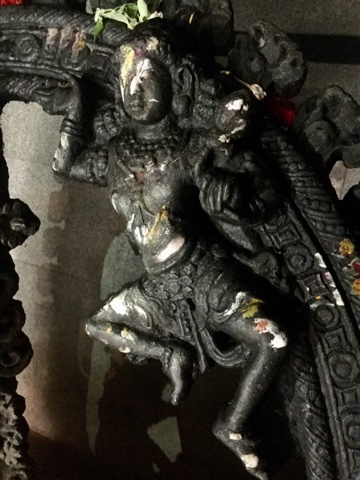 Finely sculpted and polished , the stele is a gorgeous sample  of what those Nolamba craftsmen were capable of creating in stone . Though guided by shilpashastras for basic  drafting of forms , they exercised their own imagination to add life to them by way of sculpting styles and ornamentation, borrowing ideas from diverse schools like the Chalukyas , Pallavas and Rashrakutas ,  yet managing to leave their own distinct imprint .

” During Nolsmba period , ornamentation is not superfluous or detrimental to the form, rather there is an elemental balance ” ( Andrew Cohen in The Groves  Dictionary of Art -sculptures of  Karnataka). 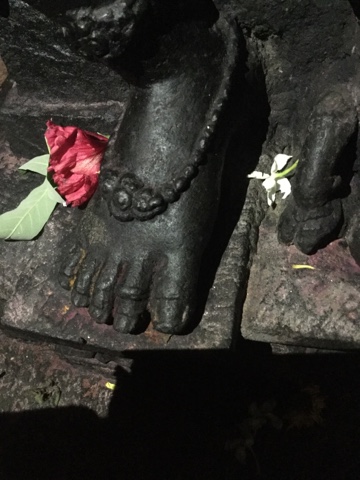 The stele was perhaps meant to be installed flush against a wall , for the work on the back is just rudimentary . It is not known where it was situated originally  before the badly neglected temple was repaired and restored in 1930 by a devotee named Bhadramma ( Mysore Acheological Records) 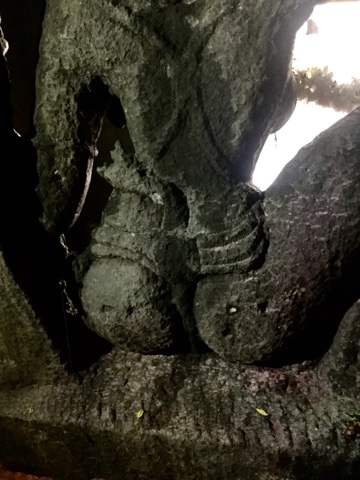 Most grateful to the kind priest who allowed us to take our time,  to study and photograph this beautiful icon to our heart’s content . It was thrilling and humbling , by turns , to experience such absolute beauty from such close quarters 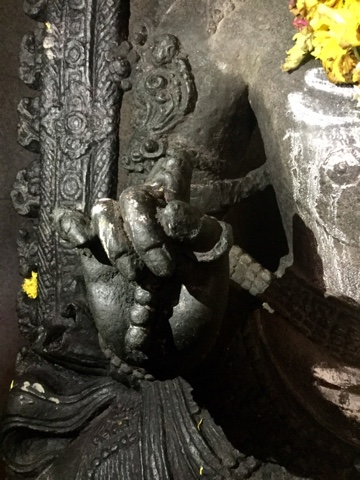