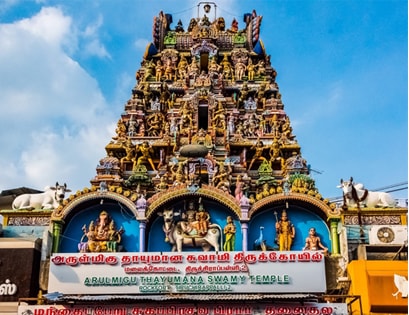 Shiva, who is worshipped in the lingam form, evokes images of Rudra, the angry destroyer, of Maheshwara, the serene meditator and even Nataraja, whose cosmic dance enthrals the three worlds.  Though celebrated as Ardhanareeshwara, the image of Shiva does not usually evoke the feminine form. Contrary to this common perception is the legend of Thaayumaanavar

Shiva, who is worshipped in the lingam form, evokes images of Rudra, the angry destroyer, of Maheshwara, the serene meditator and even Nataraja, whose cosmic dance enthrals the three worlds.  Though celebrated as Ardhanareeshwara, the image of Shiva does not usually evoke the feminine form.

The legend tells the story of Ratnavati, a Shiva devotee, living on the banks of the Cauvery.  Ratnavati is pregnant and her husband, a merchant, has to travel on work.  Since there is no one to take care of her, she sends word to her mother, who lives in a village across the river.  It is the rainy season and the mother approaches the river to find it in spate, impossible to ferry across.  In the meanwhile, Ratnavati starts having labour pains.  In their distress, both mother and daughter pray to Lord Shiva, the mother asking Lord Shiva to take care of her daughter and the daughter praying fervently for her mother.

Moved by her devotion, Lord Shiva takes the form of the aged mother and arrives at Ratnavati’s house, to her delight and relief.  The Lord takes care of Ratnavati’s labour and cares for her for a week thereafter.  The rains subside and the anxious mother arrives at her daughter’s door, surprised to see mother and child healthy and well taken care of.  She narrates her ordeal of being stuck at the other bank to the surprised daughter.  They realise that it was none other than Lord Shiva who took the form of the mother to care for his devotee and are overjoyed (a variant of the legend states that when the mother arrived, Lord Shiva was present and gives darshan to them in his original form before disappearing).

There is a temple dedicated to Thaayumaanavar Swamy at the foot of the Rockfort Temple in Thiruchinapalli, which is supposed to be near the place where the miracle occurred.  Thiruchinapalli is rich with Shaiva legends: the city itself is said to have derived its name from Tri-shira-pura or Tri-shira-palli, Trishiras being an asura who propitiated Lord Shiva with his penance.  The Rockfort Temple, which stands upon a monolith hillock (said to be the largest monolith in Asia) is dedicated to Lord Ganesha (as Uchchi Pillayar).  The Thaayumaanavar Swamy Temple at the foot of the Rockfort Temple was constructed by the Pallava king Mahendravarman in the 6th century CE.  Paintings narrating the story of Thaayuaanavar adorn the walls of the temple and most devotees visiting the Uchchi Pillayar Temple pay a visit to the shrine dedicated to the Lord who was mother.