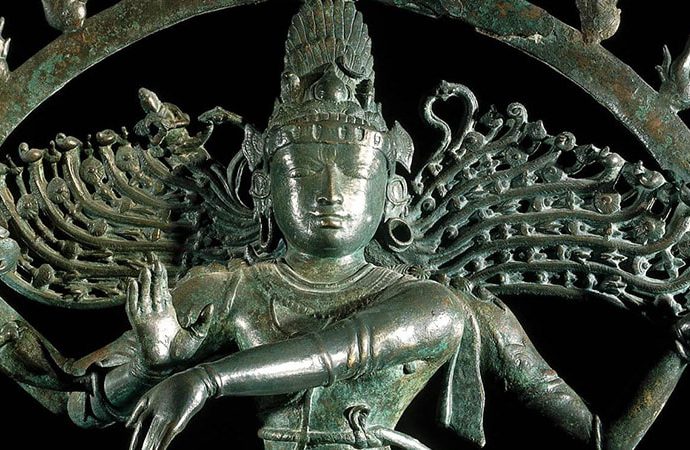 “Siva says of himself. I am the originator, the god abiding in supreme bliss, I the yogi, dance eternally having said this the lord of yogis, the supreme god, danced showing his formidable supreme reality, In the spotless sky the yogis saw him dancing, the Great God who is Lord of all beings, whose maya

“Siva says of himself. I am the originator, the god abiding in supreme bliss, I the yogi, dance eternally having said this the lord of yogis, the supreme god, danced showing his formidable supreme reality, In the spotless sky the yogis saw him dancing, the Great God who is Lord of all beings, whose maya is all that is here, and who activates the universe (Kurma Purana) 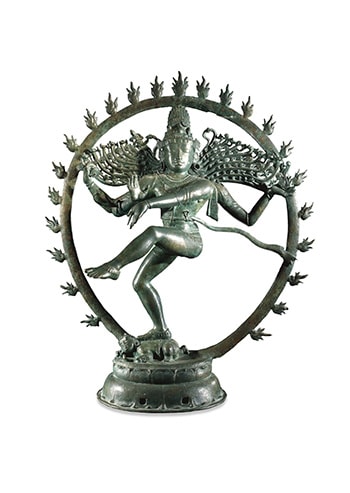 “At the end of time he dances the tandava . Stamping his foot, the gyrations of his body, his flailing arms, toss the mountains into the air, the ocean rises, stars are lashed and scattered by Sivas matted hair. In order to save the world and in his perverse power he dances the world out of existence wildly laughing scattering ash from his body so that the world may be renewed.” (various scriptures)

The bronze Nataraja is a plastic expression  of Siva’s manifestation as the lord of dancers. It represents in art what had been rendered in formless words for millennia. This iconic image has become a veritable poster child of Indian art and has generated tremendous speculation on its artistic nuances and symbolic meaning. For a layperson the image represents Siva’s tandava (the dance of destruction) whereas the implicit symbolism embodies deep philosophical and seemingly paradoxical ideas. Eulogized by many, Rodin among them, who wrote in an essay that the Nataraja has “what many people cannot see—the unknown depths, the core of life.” The layers of meaning associated with the Nataraja span mythology, philosophy, science The image speaks of the universe and holds significance for the microcosmic man and his divine self, the atman, in one overarching sweep

The Nataraja, as the celebrated art historian Ananda Coomarswamy ,has said is the “clearest image of the activity of the god which any art or religion can boast of”. At the superficial level it represents the dance of Siva, but in truth it epitomizes the five activities (panch kriya) of the lord.

The  Nataraja “is a veritable encyclopedia of mythological references” there are innumerable stories associated with the dancing lord .One of the most well known ones is the legend of the Pine forest. Siva along with Vishnu appeared disguised in the hermitage of sages in a pine forest. The guise was to rid the sages of their pride. In the disputation that followed due to the god’s (deliberately) unsavory behavior the sages let loose a ferocious tiger from the sacrificial flames, but Siva skinned it with the nail of his little finger and wrapped it around himself. The sages then produced a malevolent serpent, but the god draped it about his neck. Siva then began to dance, and a malignant dwarf monster was set upon him. Siva pressed him with the tip of his foot and broke his back, and resumed his dance aloft the monster. The gods appeared to witness the cosmic dance. Soon “all that was not Siva began to fall apart, disintegrate, evaporate into the thin vapors of apparent nothingness,” until “at the climax of the nothingness only the audience of gods remained” Then Siva paused for an infinitude and, beginning again with a slow and stately rhythm, “as he had danced the worlds out, now he danced them in again, flinging stars into their heavens, evoking life upon the earth, a kinesthesis of overflowing grace and love.”

The iconographic details of the Nataraja are rich with a “complex pictorial allegory”, Siva’s dance is a metaphor encompassing the infiniteness of the macrocosmic universe and the microcosmic individual ensnared in the vicissitudes of maya. His dancing limbs convey his fivefold action of creation, maintenance, dissolution, illusion and liberation, while his face remains poised in “sovereign calm”

The god appears four armed, his hair splayed across in vigorous movement.In his tresses lie wreathing serpents, a skull, the tiny figure of the Ganga and the crescent moon. The flailing strands are interwoven with cassia leaves. In his right ear he wears a man’s earring called the makara-kundala, and his left a woman’s ornament called lamba-patra. This signifies the “dual nature of the god who is both man and woman.”The two upper hands hold attributes, whereas the lower hands showcase mudras (specified gestures). He balances himself on one foot, while the other is raised. The figure of the god is surrounded by a flaming aureole originating from a lotus pedestal.

In the upper right hand, Siva holds the kettledrum damaru With the beats of the sacred drum he creates the rhythm of his dance, as well as the unending creation of the universe and   its infinite forms”. Sound is the first principle of creation, “everything in an unfolding universe emanates from primordial sound.” An interesting myth associated with the throbbing drum is that of the great Sanskrit grammarian Panini to whom Siva gave the boon of wisdom. The entire Sanskrit grammar is said to have poured forth from the sound of the lord’s sacred drum. Befittingly the first verse of Panini’s grammar is called the Siva sutra.

In the upper left hand, Siva holds the flame of destruction. It represents the world ending conflagration – Fire will be the agent of the annihilation of the world according to Hindu mythology-and symbolizes the destructive potential of the god.

The two upper hands thus convey a balance between creation and destruction. This counterpoise is an expression of the conflicting reality of nature itself, the contradictory forces of the continuous cycle of evolution and dissolution both at the macrocosmic and microcosmic level.

The lower right hand is held in a abhaya mudra which is the gesture of reassurance from the lord “fear not, for those who follow the path of righteousness will have my blessing.” Siva operates as a “complex oppositorum”; he destroys and is yet merciful.

The lower left hand points downwards in the dance position known as “ gaj-hasta”- elephant hand -mudra. Just as an elephant wades its way through all obstacles so too the beneficence of the lord destroys the veil of ignorance, the illusions cast by maya, paving a way for his followers.

The upraised right foot combined with the “elephant hand” gesture of the hand pointing to it signifies release, liberation, moksha.

The left foot stomps on the dwarf monster whose name (Apasmara/Muyalaka) means forgetfulness or heedlessness and “it is symbolical of life’s blindness, man’s ignorance”. It represents the “soul temporarily earth-bound by its own sloth, confusion and forgetfulness” Siva’s left foot, therefore, signifies the subjugation of ignorance that enmeshes us and keeps us from attaining true wisdom. To the perspicacious, understanding Siva’s motive can obtain freedom from the bondage of illusion.

The fiery ring encompassing the figure of the god relates the field of the dance with the entire universe.

The lotus pedestal on which the image rests locates this universe in the heart and consciousness of each person. Thus, in one sweep the icon links up with the entire universe, as well as with the world of the individual, uniting the concerns of the macrocosm as well as that of the microcosmic man, and his everyday world . This brings into focus two pertinent questions raised by Coomaraswamy to which he himself provides answers

Coomaraswamy proceeds to say “This is his dance. Its deepest significance is felt when it is realized that it takes place within the heart and the self” . The dance of Siva does not just signify the vital processes of the universe, it is equally relevant to the individual, his life and his salvation. It contains not just the energy of a pulsating universe; it carries with it the potency of wisdom, higher truth which can grant release.

In all of this, the image of frenzied momentum, the dance of primal energy,  the God’s face remains in an all seeing, unmoved calm. Siva seems “inward-oriented: meditating, absorbed in the work of fusing opposition.” A smile hovers on his serene countenance as he watches his own rhythmic play, uninvolved “although He permeates everything” . 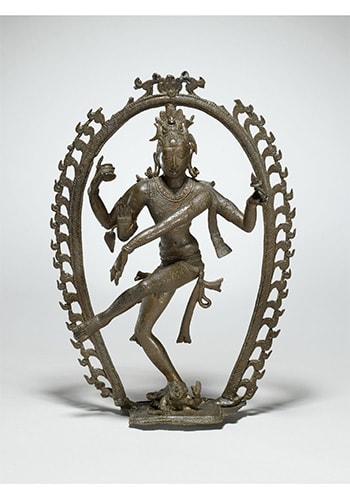 This is because “Siva is the personification of the Absolute.” He is beyond the reaches of death and time. He’s conqured yama and presides over dissolution-“he is super death”. He is Maha kaal “Great Time, Eternity, the swallower of Time, swallower of Ages and cycles of ages.” He unites opposites and surpasses them.

Thus the god “ is two opposite things, archetypal ascetic, and archetypal dancer”. He is totally passive, absorbed in complete equanimity “ inward calm absorbed in itself, absorbed in the void of the Absolute, where all distinctions merge and dissolve, and all tensions are at rest”. But on the other hand, he is frenetically active.

Herein lies a powerful message for the viewer, one repeated in treatises on karma yoga, and in the bhagwad gita- that of detached action. The image , then is a veritable symbol of the ‘Nishkam karma’ – detached, dispassionate, activity, While the god wills this universe he is  aloof from it,

In describing the absolute, the upanisads state, that there are two forms of the eternal, the static and the moving. Brahman the creative principle means “growth” which implies a reality where one (if not all) core characteristic is of movement, dynamism, “suggestive of life, motion and progress” In this context, the nrityamurti elucidates both the static and dynamic , where the god remains “unaffected by the tremendous display of his own energy”

A glimpse into the inactive active is provided by Coomaraswamy who says :

“Nature is inert and cannot dance till Siva wills it. He rises from his rapture and dancing sends through inert matter pulsing waves of awakening sound and lo! Matter also dances appearing as a glory around him. Dancing he sustains its manifold phenomenon. In, the fullness of time still dancing he destroys all forms and names by fire and gives new rest. This is poetry, none the less science”

Science too acknowledges the primal dancer. A bronze Nataraja stands in the foreground of CERN , the European Center for Research in Particle Physics in Geneva . In the words of physicist Fritjof Capra  :

”The dance of Siva is the dancing universe, the ceaseless flow of energy going through an infinite variety of patterns that melt into one another.

Modern physics has… revealed that every subatomic particle not only performs an energy dance but also is an energy dance; a pulsating process of creation and destruction…for the modern physicist, then, Siva’s dance is the dance of subatomic matter. As in Hindu mythology, it is a continual dance of creation and destruction involving the whole cosmos; the basis of all existence and of all natural phenomenon. Hundreds of years ago, Indian artists created visual images of dancing Siva in a beautiful series of bronzes. In our time, physicists have used the most advanced technology to portray the patterns of the cosmic dance. The bubble chamber photographs of interacting particles, which bear testimony to the continual rhythm of creation and destruction in the universe, are visual images of the dance of Siva equaling those of the Indian artists in beauty and profound significance. The metaphor of the cosmic dance thus unifies ancient mythology, religious art and modern physics.”