The Death of Bhisma 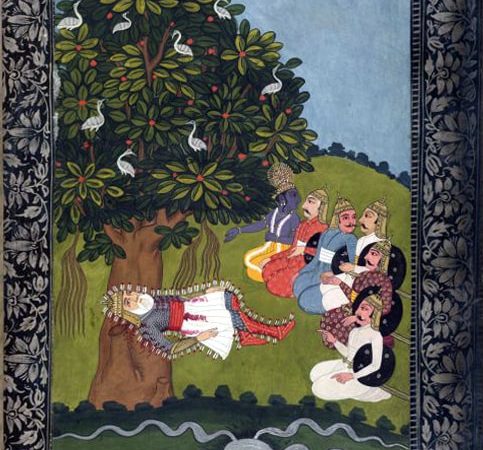 THE BATTLEFIELD is still covered with broken pieces of weaponry and rotting human and animal corpses, funeral pyres are smoking and there are ghosts wandering the terrain.1 Kṛṣṇa is the first to speak and he naturally praises the dying warrior, exorting him to, pāṇḍuputrasya śokaṃ … vyapanuda, ‘drive away the grief of the son of

THE BATTLEFIELD is still covered with broken pieces of weaponry and rotting human and animal corpses, funeral pyres are smoking and there are ghosts wandering the terrain.1 Kṛṣṇa is the first to speak and he naturally praises the dying warrior, exorting him to, pāṇḍuputrasya śokaṃ … vyapanuda, ‘drive away the grief of the son of Pāṇḍu’ (XI,50,30). It is this injunction which provides the impetus for almost all of the rest of the poem. Kṛṣṇa informs Bhīṣma that only fiftysix days remain of his life and the ancient one agrees to address rāja Yudhiṣṭhira; a rain of flowers falls from the sky and celestial songs are heard as a fragrant breeze moves on the air and a beautiful sun reveals itself (XII,52,23-26).

When the Pāṇḍava party return on the next day, Nārada tells them that Bhīṣma is ready to commence the discourse, for, astam eti hi gāṅgeyo bhānumān iva, ‘the son of Gāṅgā is setting like the sun’ (XII,54,80). Bhīṣma agrees to speak of the cosmos, saying, hanta dharmān pravakṣyāmi, ‘Right, I shall proclaim the dharmas’. This is where the encyclopaedia of customary, conventional, and scriptural law commences and it continues for two lunations until the sun begins to ascend towards its northern declination once again, when Bhīṣma surrenders his life and is quietly cremated, an event for which the poets and editors provide only cursory description.2

At the moment when his long discourse concludes the poets say of the old warrior, conjuring up a beautiful image: tūṣṇīṃbhūte tadā bhīṣme paṭe citram ivārpitam muhūrtim iva, ‘Then, when Bhīṣma was quiet, it was suddenly like a picture painted upon a cloth’ (XIII,152,1). This image occurs more extensively in the Bombay Edition:

1 This is an excerpt from McGrath, 2017, Chapter 4; New Delhi.
2 There are no great funereal or obsequial scenes in Epic Mahābhārata, which is unlike what occurs in the two Homeric poems: Il. XXIII, and Od. xxiv.

That image, of a circle of kings attending to the demise of the greatest of their heroes, is akin what the poets throughout the length of this epic poem, the Great Bhārata, have been evoking throughout the course of the poem’s performance. This is of course an image of ekphrasis, a static picture of the poetic narrative visually supplied via the acoustic signals of spoken language.     3 The circle of kings are in fact not simply the audience within the poem who attend to Bhīṣma but also the kṣatriya audience listening to the poem itself being performed, whom we as readers imitate two or three millennia later.

When the time of the Winter solstice is approaching Yudhiṣṭhira returns from Hāstinapura with his family and all the obsequial paraphernalia, including the sacred fire for the cremation. Bhīṣma speaks to the king and then to Dhṛtarāṣṭra and finally to Kṛṣṇa. Again, in addressing Vāsudeva, Bhīṣma praises him for a final time in a nominal fashion and requests that Kṛṣṇa permit him to desist and so die.

He asks Kṛṣṇa, anujanāmīha māṃ, ‘release me, here’, wanting to die at last.Bhīṣma then actively surrenders his life and enters onto the stage of death and the poets say:

Drums are heard in the sky and a celestial floral shower descends. He is quickly dressed in funereal garments and set upon the pyre and his ashes are then removed and taken to the Bhāgīrathī, the Gāṅgā where Vyāsa and Nārada are present. 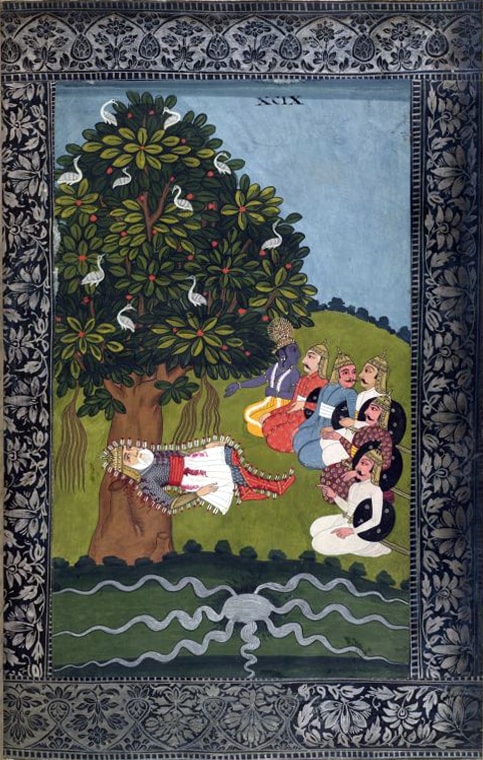 death of bhishma from the Razmnama . Image source wikipedia

Then, during these final moments, his divine mother appears from the waters and addresses the assembled and mournful Kurus. She sings his ultimate lamentation, praising his conduct and deeds, mentioning his capture of the three brides from Kāśi and his defeat of Rāma Jāmadagnya and his magnificent acts of combat at Kurukṣetra against so many kṣatriyas and kings (XIII,154,11-25). Then Kṛṣṇa speaks the last words at the ceremony, consoling her:

XIII,154,32: vasūn eṣa gato devi putras te vijvarā bhava
O deity, this son of yours has gone to the Vasus. Be calm …4

3 I discuss this moment of ekphrasis further in McGrath, 2011, pp.97-98. The Shield of Achilles in Scroll XVIII of
the Homeric Iliad presents a similar occasion of representation.
4 The Vasus were originally a group of eight Vedic divinities.

The festival celebration of Bhīṣma’s death is nowadays celebrated during the month of Magh just after the sun begins to move northward again; this is Bhīṣma Aṣṭāmi, which falls in late January or early February. In Two Thousand and Seventeen the festival occurred on February the third.

At the end of the poem, in svarga, which is usually translated as ‘heaven’, that shining place that is spatially upward, the psyche of Bhīṣma is described by the poets as being:

Such was the divine standing that this superlative and ascetic hero received in the eternal cosmos after a life of terrific ordeal and perfect honesty.

5 As we noted earlier, among the Vasus Bhīṣma is usually considered to be Dyaus, the sky, the eighth Vasu to be incarnated on earth. Concerning the location that invisible portion of a human being which survives death, there are three possible situations in the epic: there is the indraloka, ‘the heaven of Indra’ where the dead heroes proceed to after their death in battle; there is the yamasadana, ‘the abode of Yama’; and there is svarga. The precise eschatological distinction between these three terms is inexact and they appear to function as synonyms. Certainly,
the indraloka and svarga would be upward in location or aerial whereas the yamasadana is downward and
subterranean.