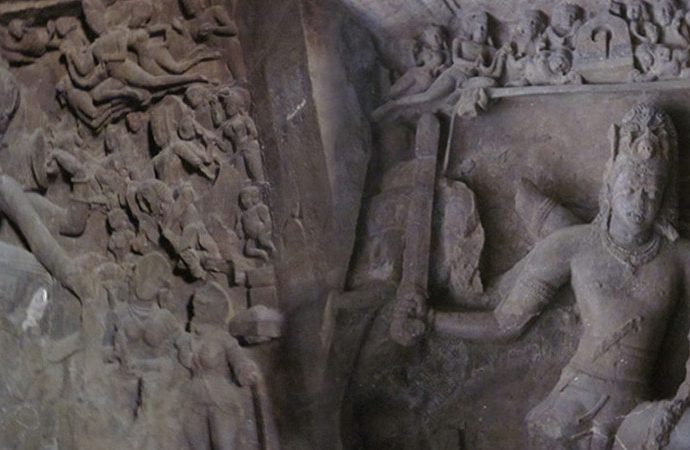 Siva with his “full face and two monumental profiles,” is a “masterpiece of sculpture,” Siva’s “eyes closed on the flow of time”, the lord of dance, obliterates and recreates multiplicity, allowing man to glimpse a supra and infra universe. It takes an hour by ferry from Mumbai to reach the Elephanta Cave temple. An island

Siva with his “full face and two monumental profiles,” is a “masterpiece of sculpture,” 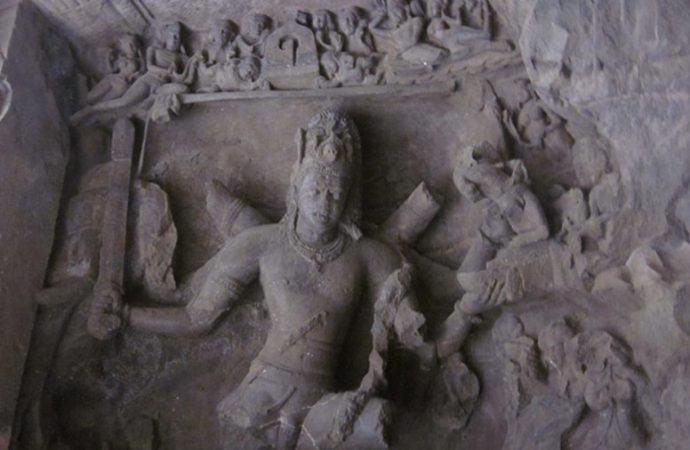 Siva as slayer of demon Andhaka

Siva’s “eyes closed on the flow of time”, the lord of dance, obliterates and recreates multiplicity, allowing man to glimpse a supra and infra universe.

It takes an hour by ferry from Mumbai to reach the Elephanta Cave temple. An island

so named by the Portuguese because of the large stone elephant found there, includes two hills and multiple caves.

Dated to the 6th century AD, the temple’s ‘size, scale, sculptural and architectural conception rank it amongst the most impressive of South Asian art monuments’. The sculptures of Siva are ‘marked with purity of form, balance, and harmony as well as a sense of detachment. Inherent in each statue is a sense of power, majesty, and sublimity’. 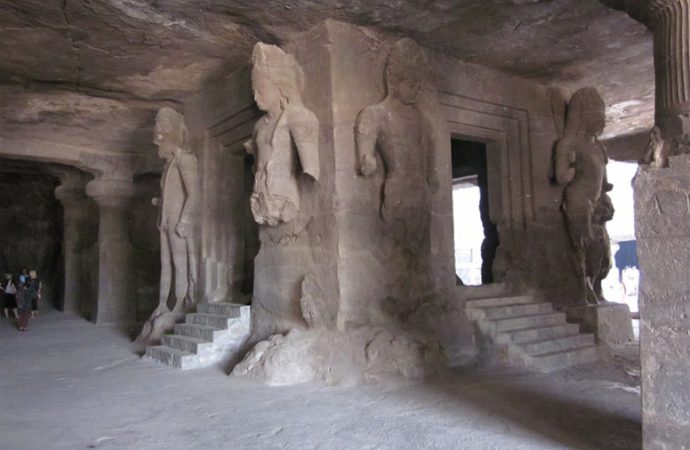 The square shrine on the west of the pillared mandapa (hall). This is one of the focal points of the cave temple. It enshrines a linga and is manned By 8 colossal dvarpalas (door guardians)

The focus of the temple is on a square shrine housing a linga, and on the majestic image of the triple headed Siva. This is surrounded by lila murtis of Siva, ‘the various forms and actions in which his divinity is displayed’ 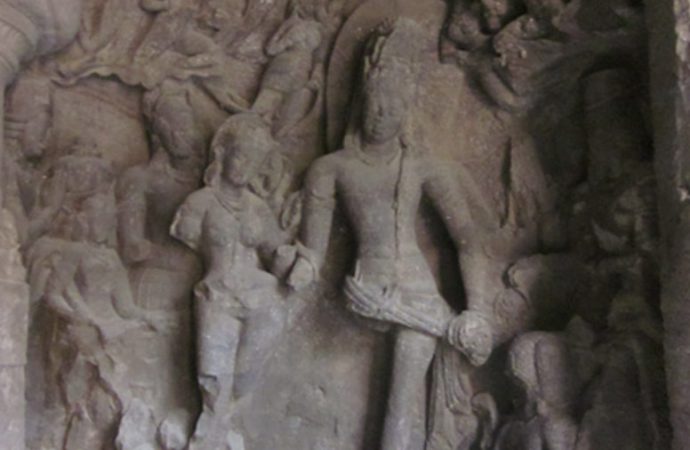 The three faces of Siva emerging out of a singular base, form a pancamukha (5 faced) linga of unsurpassed beauty and grandeur. ‘The frontal image surges upwards straight and strong as a pillar with silence on its face and radiance on its crown. The heads on the right and left repeat the ascent of the central pillar’. The fourth face is implied, and the fifth is transcendant, beyond the sight of humans and is not to be carved.

The Visnudharmottara Purana speaks of the five faces of Siva –  Isana, Tatpurusa, Aghora, Vamadeva, Sadjyota. ‘The name of each face is a mantra, each mantra conjures up a corresponding vision of that supernatural presence. It is said that the body of Siva is mantra, and it is made visible in the shape of a sign. The linga is composed of mantras and is therefore to be regarded as the body of Siva, the place where he is present.’

‘Each face conveys a particular aspect of Siva and its physiognomy indicates its nature’. Siva’s right face represents the male principle. The face looks aggressive, destructive, virile, dynamic, fierce, and terrific like time itself. The image is charged with energy, angry as if prepared for destruction. The face is turned towards a serpent, a threatening symbol of death.

Siva’s left face represents the benevolent, pleasing and feminine aspect of the lord, his shakti; The face is soft, sensual, lost in divine contemplation and is surrounded by a crown of curls. In its hand is a lotus flower. 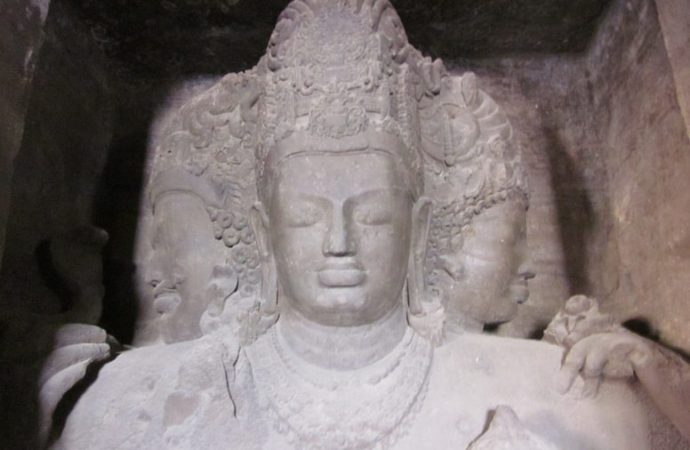 Siva’s central face is calm and detached. It is the supreme principal that combines the dualities of phenomenal existence. ‘Siva’s eyes are closed. He is inward-oriented: meditating, absorbed in the work of fusing opposition. His power is all encompassing and transcendental. He is uninvolved although he permeates everything; conscious though unconscious; supportive yet passive.’ The face exudes sacred composure and is crowned by radiating strands of hair piled high, interspersed with intricate jewellery and symbols of generative power. The crescent moon adorning the crown is a symbol of perfectedness and the power of the lord. In his left hand he holds a citron (matulinga/bijapuraka), a fruit rich in seeds , symbolizing fecundity – it is full of the atoms of the seeds of this universe.

‘the contorted virile visage of bhairava and the dreaming feminity of uma represent the mystery of the coexistence of the absolute together with the fundamental pair of opposites of male and female as they exist in god. Deeply silent , the triune head holds its mystery, vital and deathly on the left, knowing and blissful on the right and free of any attribute in the face in the middle.’ 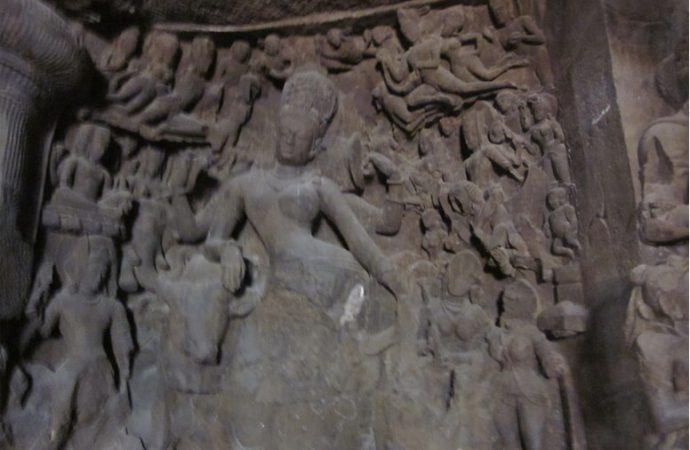 To the left of the Mahesvara panel is the image of Ardhanirishwar , the androgyne god. It  epitomizes the concept of the unification of purusa and prakriti, the dualistic complements present in every form of creation, purusa the male half is inactive and is manifested through prakriti the female half and the two are thus inseparable. The panel shows Siva reclining on his mount Nandi. The Goddess holds a mirror in which is reflected the god’s being. The graceful disposition of the left half, the fullness of the breast and the curve of the hip are in contrast to the robustness of the male half. The face and hairstyle is convincingly half male, half female. A host of assembled gods fill up the panel.

To the right of the central image is Siva as Gangadhara, the support of Ganga . It depicts the descent of ganga from heaven to earth and into the netherworld, her impetuousness stilled by the great lord Siva.

Flanking the west side of the temple  is a grotto celebrating the marriage of Siva to Parvati (kalyana-sundar murti). It depicts King Parvata ushering in the coy bride towards Siva, Brahma is visible as the officiating priest. A host of gods and goddesses and divine beings witness the wedding. Facing the kalyansundaramurti is the dramatic scene of Siva as a demon slayer. The image abounding in power depicts the killing of the demon Andhaka (Andhakasurvadha).

At the entrance to the cave is a sculpture of Siva absorbed in meditation as Yogisvara/Lakulisa . Facing it is the eight-armed Siva dancing the Tandava. ‘Siva’s left eyebrow is raised in sensual delight, his body twisted in the well- known thrice bent posture (tribhanga) , as though he seeks to attract the viewer into his creative rhythmic pattern while at the same time remaining aloof from the world. The dancing Siva represents the dynamic movement of the cosmos: the eternal process of creation, destruction, and recreation. According to the great art historian Coomaraswamy 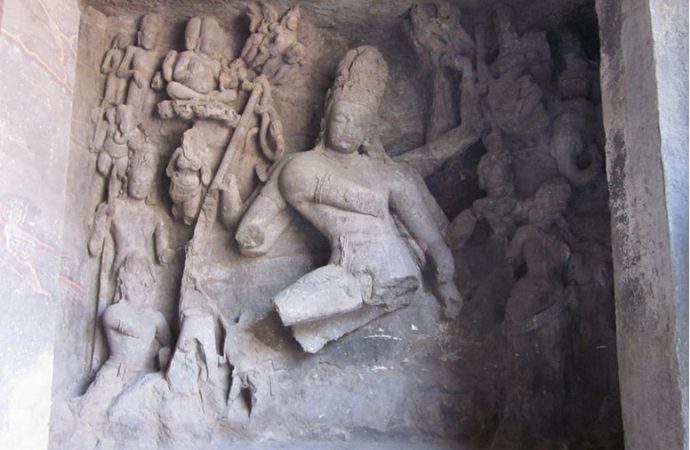 “Nature is inert, and cannot dance till Siva wills it: He rises from His rapture, and dancing sends through inert matter pulsing waves of awakening sound, and lo! Matter also dances appearing as a glory round about Him. Dancing, He sustains its manifold phenomena. In the fullness of time, still dancing, He destroys all forms and names by fire and gives new rest.”